You are here: Home / Blog / 900 Words On The History Of Table Tennis (Ping Pong)
Share on TwitterShare on FacebookShare on PinterestShare on LinkedInShare on Email

Just like many other great sports, ping pong had humble beginnings. Infact ,  it used to just be an indoor adaptation and started as an improvisation for when it was impossible to play lawn tennis outdoors during winter.

The entire transformation process from which the sport was completely carved out must have been pretty long but finally in the 1880s, it became an independent sport on its own.

A comprehensive collection of history has confirmed that the sport was invented by an English firm, J. Jaques and Sons, towards the close of the century in 1800. However, it was later trademarked as “Ping pong” in the United Stated by the Parker Brothers.

Given the structure of the game and how it was adopted, some people still have preference for the name Table tennis. Therefore, as the game caught on as early as the 1900s with tournaments having over 300 participants, the ping pong association was formed in 1903 for regulations and rule formation. During this period, it was later renamed to the “Table Tennis Association” in 1922. 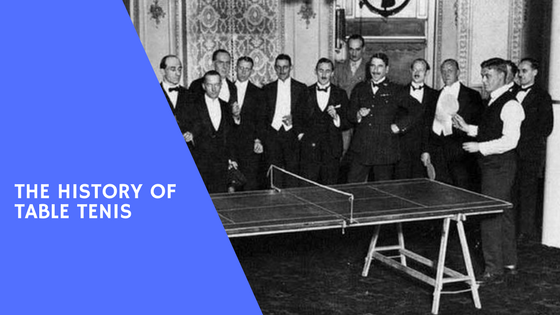 The History Of Table Tennis

When discussing the history of table tennis, it’s reasonable for more attention to be on its evolution thus far, where we are in its evolution, and the things we could look forward to in the nearest future. During this period, the game was split into the indoor and outdoor versions , with different materials adopted as would befit said environments. A summary of these details are discussed thus for your perusal.

In a year after the merger, the politics of the sport was satisfactory and there was more emphasis on the play rather than the committee that governed the play. During this period, the tables were repainted and the height of the nets were increased to 6¾ inches.

This made the playing surface very slow and attacking more difficult as you only had to play loops, and the player with too much or not enough effort on a stroke lost. The effects were quite disastrous as the longest rally in the world championships was recorded in Prague, lasting over two hours.

For this reason, ITTF lowered the height of the net to 6 inches in 1938 and also banned the finger-spin service which was quite common among the American players. This went on for two years, but then due to the world war II in 1940, there is no record of any sport really, for the next 10 years.

In 1952, Japanese ping pong player, Hiroji Satoh became popular for his use of a wooden racket coated with a thick foam sponge rubber. Technically, this combo provides much more spin and speed compared to the conventional rubber rackets with pimples.

He went on to win the World championships in 1952 and began an Asian domination of the sport which lasted till the early 1900s, when Sweden was handed the baton.

In 1957, the World championships was changed into a biennial event as a result of the logistics of the event, such as finding suitable venues and dealing with the accommodation of guests. In the following year, the USSR debuted in the competition as the World Championships was hosted in Budapest. This was a step forward in maintaining peace after the world war.

In 1959, the ITTF published regulations guiding the thickness of sponge rubber and ordinary pimpled rubber.

During this period, there was a discovery that proved that using the repair glues for bicycle tires, you could dramatically increase the spin and speed produced by your paddle. This discovery was made by Dragutin Surbek of Yugoslavia and Tibor of Klampar of Hungary. This discovery was termed – speed glue.

In 1980, the first Tennis World Cup event was held in Hong Kong and the first world veteran championships was held in Gothenburg, Sweden.

Fast forward to 1985, ITTF adopted a two color rule for opposite sides of the rackets as part of their standard regulations. Three years later, table tennis became an Olympic sport in South Korea.

In the last century, there have been other major changes both by players and the ITTF that influenced the game and made tennis history. Some of them include the increase of the diameter of the ball to 40mm in 2000, the changing of the scoring system to 11 point games, best of 5 and best of 7 games match and in 2002, table tennis became a common wealth game in England.

In the 2000s, while the frictionless long pimples became quite popular among many players as they tried to negate the spin and power produced by the modern speed glue and technology in circulation, the tech was almost banned.

This happened in 2006, but then, the ITTF withdrew all approvals of tennis glues for performance enhancement in the following year. This was due to a health incident involving the speed glue in Japan.

In 2008, the use of speed glues was labeled illegal and therefore, banned for all ITTF junior competitions. Later in the same year, they introduced machines that could test for illegal VOCs as part of their regulations.

We look forward to more improvements and regulations in the next decade.