You are here: Home / Equipment / Stiga Pro Carbon Paddle Review – The Best For Intermediate Players?
Share on TwitterShare on FacebookShare on PinterestShare on LinkedInShare on Email

You cannot talk about table tennis rackets without mentioning Stiga Pro Carbon , one of the best selling paddles on the market.

The Pro Carbon like its brother , STIGA Evolution , is best suited for intermediate players looking to take their game to the next level. It scored high in Speed (96) and Spin (94) but ranks a little low in Control (80) , although i don’t see it much of a big deal. 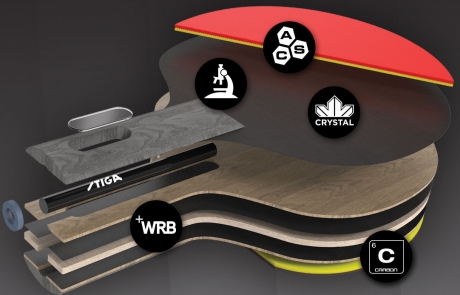 This part of the paddle is built from 7 piles of thin wood, 5 of which are balsa while the remaining two are carbon used on outer layer of each side of the paddle to complement the strength of the balsa. The balsa wood on its own is an ultra-lightweight center-ply wood which has an impressive influence on the speed and reaction time in the stroke delivery of ping pong paddles.

Without any doubt, this combination improves the strength and power of the blade while maintaining an impressive control rating. This combination makes the pro carbon a bit heavier than most pre-made paddles, but it is still lighter compared to other blades manufactured for offensive game play.

Technically speaking , with such weight behind every stroke, you won’t need to worry about damaging the blade by going too hard on the ball. Also, the reverb effect on the blade from the contact with the ball would be reduced.

However, it is advised that given the shot power of the paddle, you should go easy on your strokes to prevent the ball from going farther than the length of your opponent’s side. 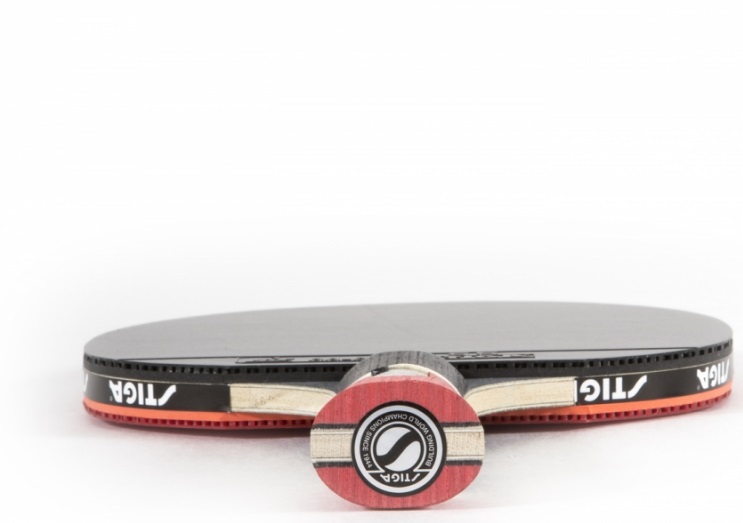 The pile of wood used in the design of the blade is complemented by STIGA S5 rubber which is padded with a soft 2.0mm thick sponge designed such that the black side is a bit harder than the red side.

The rubber is of beginner grade and can only generate a regulated amount of speed and mechanical spin with an impressive control performance. These features are very important to prevent you from losing your smash shots to your opponent.

To simplify , the blade has the potential to deliver hard shots which without good control, would go wide. This is prevented by the beginner grade rubber.

This design also reduces your chances of delivering slow loops or flicks. Therefore, it is more favorable to those who prefer flat hitting to spins and loop shots.

The handle is designed such that it balances the weight of the blade in your hands and it does not feel like a hammer when using it.

The design features a metal rod within which helps give you a good grip (with whichever grip style) and an overall balance for even strokes. It is slightly lighter than the blade such that all the momentum is directed to the center of the blade and give your shot more power.

The only downside to this specification is that it might take a while before you get used to the weight distribution, but once you do, you’ll be able to use it to your advantage.

The Pro Carbon is an ITTF approved performance paddle and as such it can be used in official tournaments of all levels.

Like other STIGA products, its performance is influenced by the WRB technology featuring the Weight Balancing feature which helps shift the balance of the blade to the point of contact with the ball; the Recovery Rate feature which decreases the weight of the blade at the recovery swing after each stroke; and the Ball sensitivity feature to guarantee an extra-sensitive touch controlled by your handle and stroke.

This, combined with the adopted crystal technology which hardens the surface and increase the reaction time and speed of each stroke, gives the paddle a performance rating of 99% for speed, 80% for control and 100% for the spin.

Conclusively, this paddle is suitable for beginners developing the European style of play for mid distances and players who want to be proficient in an offensive style of play. However, absolute beginners with no previous skill and experience in the sport might find it a bit hard to use.