Whether you’re looking to buy your first paddle or perhaps , you just want a new product for your ever growing collection of rackets , Stiga Evolution is always a great choice.

The Evolution is a near-perfect paddle with ratings of 96 in Speed , 94 in Spin and 90 in Control. This racket is best used by intermediate players and/or players who play defensive table tennis , unlike the Pro Carbon that is more suited to offensive play.

Our Stiga Evolution Review talks about the build , features and why its good for defensive , control based style of play.

The Evolution features six piles of light wood for the blade giving it a pretty sturdy build while keeping its weight minimal and less fatigue-provoking after long hours of play. This makes it very favorable to the intermediate level of players who have been into the game for a while. Such players would have built enough stamina to place shots with slightly heavier paddles over time.

For The Evolution, there isn’t really a special thing to note about the blade itself. The real magic is found in the rubber and the handle, mostly because of how STIGA’s proprietary technologies are used to modify its performance. 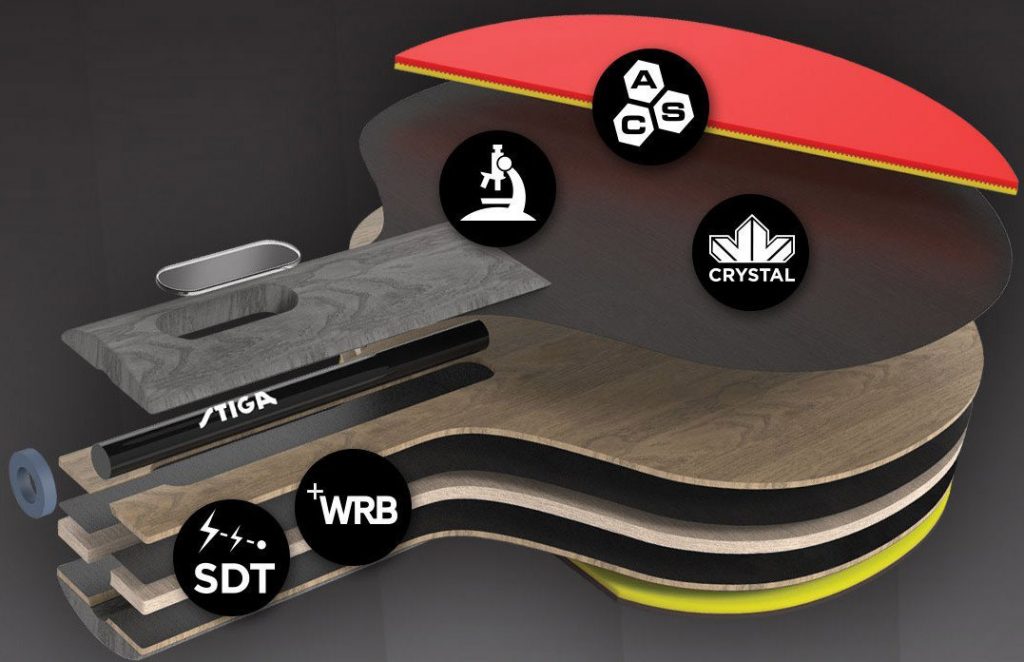 The six piles of wood in the Evolution is padded on both sides with a layer of 2mm thick rubber. The rubber itself features unimpressive amount of microscopic air bubbles that holds each rubber particle together and makes it firm enough to get the shots fired and conserve the reverb effects of these shots to be dispersed.

This is made possible by the effect of STIGA’s proprietary Shock Dispersion Tube technology in the handle.

STIGA Evolution uses a premium grade of rubbers modified to generate more spin during play while giving the player more control over the ball. Basically, apart from the difference in the number of woods and wood type, this not only differentiates the Evolution from the Pro Carbon, but also gives it an advantage.

However, given the delivery rate of the spin and shot speed of this paddle, it might take a while before intermediate players get used to it. When that happens, you can fully appreciate the beauty of the paddle.

The handle of a paddle is just as important as the other parts that are supposed to have direct contact with the ball. This STIGA model, like others, features the Shock Dispersion Tube technology which collects the tension from the surface of the paddle after every stroke and then redistributes it to the surface of the paddle. This helps to improve the shot power of your strokes.

Unfortunately, most of the time, the control on the paddle is not enough to regulate the strength of the shot and prevent you from losing a few points, which is why you must learn to use this to your advantage.

In other words , the Evolution is not meant for an aggressive style of play, unlike the Pro Carbon. Rather you must conserve the energy thrown at you and when you get the chance, unleash the entire momentum in a well-calculated stroke and with it take down your opponent.

So far, the Evolution has been compared to the Pro Carbon on multiple occasions in this review. This is because they are rated similarly even though both of them were designed for completely different styles of play.

As explained in the introduction, you need to understand your style of play as well as the design intentions of each paddle before you make your purchase.

Considering the fact that you needn’t maintain an offensive or a defensive style of play throughout all your game , it’s best to have both the Pro Carbon and the Evolution in your racket bag in case you decide your opponent needs to be surprised.

Also, it seems pretty tricky that a paddle meant for a defensive style of play has an impressive amount of shot power potentially resting in its blade.

However, if you take your time to understand what the manufacturer had in mind during the design, you would realize that the SDT technology basically replicates your opponent’s shot strength in your return stroke such that it delivers the ball back to your opponent but with more spin and precision depending on your skill level.